TEA is a DAO consisting of miners, developers, clients, and investors. Developers first compile their rich dApps to Wasm modules and then deploy them to TEA. Clients pay to use the dApps while miners earn the gas fee measured by the $T token.

Issuance of the Tokens

Just like the Bitcoin network, all new $T tokens are generated and awarded as part of the mining process, in which miners perform routine tasks such as running remote attestation of computing nodes, proposing new blocks, and running smart contracts. Once applications become available and getting used by clients, miners with computing nodes (i.e. with a CML token planted) will start to earn $T token by executing tasks for the clients. We expect that miners can earn $T tokens much faster by running tasks for the clients as compared to running routine tasks for the TEA network.

Destruction and Demise of the Tokens

When a CML is auctioned, the $T received from the auction will go to the treasury of the DAO, which will then decide how much of the $T will be destroyed based on the supply and demand at the time.

CML has a pre-defined lifetime, measured in number of TEA blockchain blocks. Once a CML has reached the end of its lifetime, it can no longer be used, and it will no longer have value in the TEA network. There is no reason to think of the limited lifespan of CML in a negative way; there are some very important architectural reasons for this.

This is important for multiple reasons:

The different ways that $T and CML tokens can be used are depicted in the following diagram: 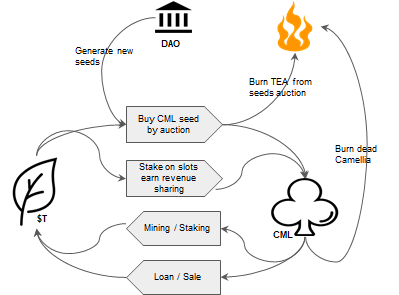 Pricing of the Tokens

The value of the $T token is stable in terms of computing resources it can buy. This means that the value of $T will likely fall in fiat terms as technology improves and computing costs fall.

CMLs are sold through auction. So their prices are determined by the market force. Based on the level of demand for new CMLs, the DAO will adjust the birth rate of new CMLs. CMLs can be traded. The value of a CML is determined by its following attributes that impact its ability to generate additional profit:

As described before, we predict the fiat value of the $T token will fall over time. This encourages members of the token economy to invest $T rather than holding on to it.

To better understand the benefit $T, consider an analogy between USD and investing - if one were not careful they could end up losing their wealth due to inflation as opposed to making any substantial gains off conventional investments such as banking institutions which offer measly interest rates nowadays anyways but don't stand a chance against inflation because what good does having some extra dollars do when nothing will buy anything?

You can think about $T tokens within that same paradigm, you cannot make money on them alone, but you can make money by investing them in CML. You can think of $T as the currency system, and CML as the asset classes that will offer you real tangible value over time.

Frozen CML seeds are allocated to early investors who are already aware of the value of owning CML. This means that those who are able to get active mining nodes for $T will be those early investors as there is a limited supply at this point. Numerous other blockchain projects often generate initial tokens in the genesis block and distribute these to investors and team members, however this is not true with $T because frozen CML seeds exist in the beginning.

Why does this matter? It makes sure that TEA economy is bereft of speculation and volatility which have been the greatest threats in the world of blockchain so far. Several tokens have crashed or soared for very archaic reasons; because our early investors know the intrinsic value of their investment, it is far less likely that they will dump. The best staking slots are initially occupied by the most sensible investors who have no reason to dump. Even if someone does dump some $T the volume of trading in CML and $T is low enough to where these dumps won't have such a significant impact on the price either short term and especially long term.

Because this is the first implementation of TEA economy, it will be crucial to make sure that it doesn't end up being a system similar to traditional fiat currencies that have been plagued with centralization. Even though we are all excited about the potential of $T, there will be numerous high risk situations that will require us to analyze and guide the network appropriately in order to ensure its success. The distribution of $T is one way we can foresee this happening and it has been designed for just such a scenario.

There are multiple ways to invest one’s $T tokens:

For the token staking scenario, investors can stake their $T tokens to share the revenue generated by a computation node. Each CML has slots that investors can purchase. Slots with lower indexes (the lowest index is 0) have greater weights and therefore yield a higher return on investment (ROI). Each slot in each CML costs 1000 $T (this number is subject to change). Slot 0 is occupied by the miner. A new investor would occupy the lowest open slot.

Investors can stake new slots or unstake their existing slots at trading windows that appear every 1000 blocks, which is equal to 100 minutes (a new block is generated every 6 seconds). The chart below illustrates how revenue sharing is achieved by staking $T tokens in an available slot of a computation node: 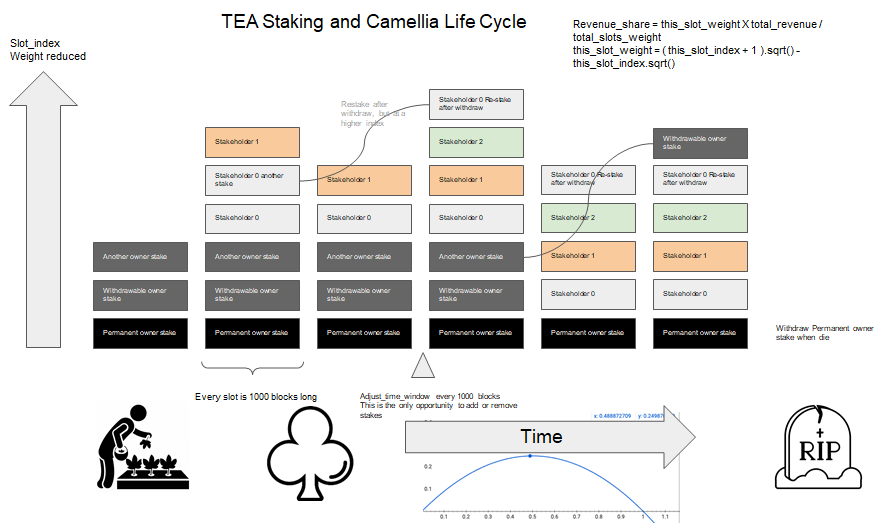 When an investor unstake their existing slot, all the stake in high indexed slots would slide down one index.

The risk associated with staking is that if a computation node is found to be malicious, the penalty can include the slashing of all the tokens staked in this node. Therefore, investors should do their research before staking their tokens. When a CML reaches the end of life, its associated node will no longer earn any tokens. The tokens staked in this token’s slots will be returned to the original owners.

In terms of supply and demand, when most of the $T token holders stake their $T tokens in CML or new projects, there would be fewer available $T tokens on sale in the market. That can increase the scarcity of $T and help to maintain the token price.

In order for clients and investors to acquire $T tokens, a cross-chain bridge will be used to connect the TEA blockchain and distributed token exchanges. The following table summarized how different participants would do about the two tokens.

Mechanism for Entrepreneurs to Raise Funds within TEA

Application developers in the TEA ecosystem provide real-world solutions that can run on the TEA platform. In order for application developers to get early-stage funding support, we have designed a way for investors to use their $T tokens to invest in such projects. Investors get rewarded in two ways: revenue sharing when the application goes live, and token price appreciation when later-stage investors join the project. For this purpose, each project will have its own unique token in the TEA ecosystem.

To maintain a more predictable token price and protect the investors, we will use the Bonding Curve approach, governed by the DAO.

In the TEA ecosystem, a bonding curve is an autonomous market maker powered by a smart contract. Both buy price and sell price of a token will follow their respective curve, and rise as the token supply increases, as shown in the following chart:

The bonding curve allows investors to make a profit over time when the project they have invested in is recognized by more investors over time, who would then need to pay a higher token price to invest. If an investor changes their mind before new investors join, then they can sell at a small loss, as the sell price is always slightly lower than the buy price, when the token supply remains the same. The tokens earned from the price difference would go to the treasury of the DAO.

This is a very scalable solution, as the bonding curve for each application development project is managed by a smart contract. The parameters for each curve can be chosen by the founder of the project within a framework that is governed by the DAO.**